VIDEO FORMAT: THE FASTEST REACH TO YOUR AUDIENCE

In cooperation with TAG Media and supported by Marsh Open Space, the seventh meeting of the AmCham Marketing and Communications Group held a panel discussion on video format and on-line marketing.

Moderator of the panel, Radomir Lale Marković, Executive Director of TAG Media, introduced the participants to the historical context of the development of video production, pointed out the key terms and developed the questions needed to lead the companies and brands in a definition of on-line video performance: target audience, a form of advertising, content, metrics & analysis and budgeting.

After the introduction, Marković opened the panel discussion: ”Video format: the Fastest Reach to Your Audiences with the participation of Rade Tričković, General Manager at Httpool, Ivan Bildi, Internet Marketing Expert and Dragana Jović Tucakov, Marketing Manager at Microsoft.

During the panel, Tričković commented on the trends and the value of advertising on the Internet and said that the video format is a form of advertising that will be dominant in the coming years because with the help of videos for a short time ( an average of 60 seconds) we can gain the attention of viewers, especially if the content is attractive. Tričković explained some metric specifics of video advertising on the Internet, such as measurability and segmentation, which enable companies, at every moment, to exactly defined target groups interested in the content, monitor the results and the number of views, which is not the case with TV advertising, where it is not possible to avoid the negative effects of advertising.

Ivan Bildi presented the ways in which we can implement video advertising on social networks, such as Facebook and YouTube, noting that in recent years more and more companies have decided to present products and services on social networks with the help of video advertising. In this respect, social networks offer a number of options, such as live streaming, where we can attract the attention of viewers for potential clients. The latest trend in video advertising is that the video content is unmounted, is very short and after being watched disappears forever, which will be the main challenge to which companies must adapt and implement in their marketing strategies on the Internet.

The panel was opened to a session of questions from the audience.

The event was organized in cooperation and with technical support by Marsh Open Space. 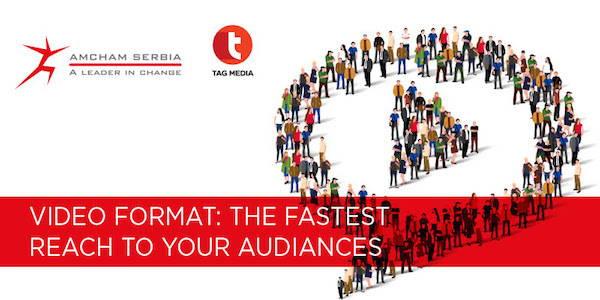